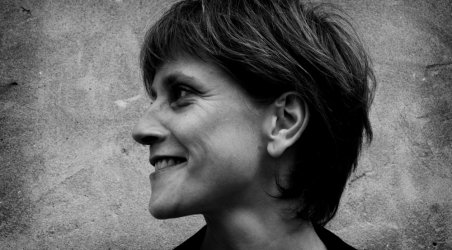 ( Photo: Mark Solborg )
Tenor, soprano and alto saxophone, band leader and composer.
Pernille Bévort is a graduate of the Rhythmic Music Conservatory in Copenhagen, Denmark (1989-1993). After completing her degree, she has become increasingly in-demand as a member of various jazz ensembles in Denmark and Sweden.

Apart from working with small ensembles, Bévort has performed with several professional Big Bands in Denmark during the last decade: The Ernie Wilkins Almost Big Band, Kroner’s New Music Orchestra, The Danish Radio Big Band and the Aarhus Jazz Orchestra (Klüver’s Big Band) among others.
As a member of The Ernie Wilkins Almost Big Band and as a frequent substitute with the Danish Radio Big Band, she has performed with many international artists. Among these are: Randy Brecker, Tony Coe, Putte Wickman, Tim Hagans, John Scofield and Richard Bona.

Since 2015 Pernille has been a regular member of the Swedish Monday Night Big Band in Malmö and from 2016 she has been playing several projects with another Swedish Big Band: the Bohuslän Big Band in Göteborg. (One of the last tours with BBB was in oct. 2017 with Maria Schneider).
She is also part of the new Danish 13 piece ensemble MALUBA with Marilyn Mazur, Fredrik Lundin and Kasper Bai as the 3 co-leaders and composers. This group had its debut during the Jazz festival in Copenhagen 2017.

Since 1995 she has been leader of several diverse ensembles.
At present these include her trio, Bévort 3, and the septet/octet RADIO BÉVORT. Pernille Bévort has released 13 albums as band leader (july 2021).

Apart from her own groups, Pernille has composed for several other ensembles.
Among these are The Copenhagen Art Ensemble and a variety of ToneArt work shop ensembles (ToneArt is a composer association).
Pernille Bévort has been awarded the prestigious Ben Webster Prize, the JASA prize (jazz reviewers) and the LO’s Kunstnerlegat (artist grant) in acknowledgement of her work.
Furthermore, Pernille has received several composer grants from the Danish Arts Foundation within the last decade. From 2011 untill 2013 she was part of the comittee for composer grants in the Danish Arts Foundation (the jury concerning rhythmic composers).
April 11th 2021 Pernille Bévort received an honorary award from the Danish Conductors Association (an association of conductors and band leaders).
The album BLIK with Radio Bévort (may 2020) was among the top 10 Danish jazz albums of the year (2020) according to the jury from the Danish jazz magazine Jazzspecial (14 reviewers). Oct. 2020 Pernille was also nominated for a Danish Music Awards Jazz as composer of the year with this album.

Pernilles latest trio album is ‘On Fire’ with her trio Bévort 3.
In Oct. 2021 she was nominated for a Danish Music Awards Jazz with this album in the category album of the year.

Here you can hear some short excerpts from the release ‘Which Craft?’ with Radio Bévort, june 2016, released both digitally and on Cd: