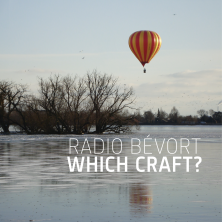 Link to the album on digital services including Itunes

The very first review of the new Cd "Which Craft?" arrived on the releaseday June 17th 2016.
Here is a short extract:
“It´s apparent that Bévort joyfully makes use of the different possibilities she has as composer and arranger when it comes to the many possible combinations of instruments in this ensemble. She shows both overview and reserve of strength. The release is a remarkable and particular delight”
It's possible to read the whole review here (It's in Danish)   - Jazznyt.blogspot, Niels Overgård

The next review was published a few days later on June 21st 2016:
Here is a short extract:
"It´s a release that shows thought-through integrity and where the melodies are in focus.....the lovely «Heavy Feather» could almost sound like the score for a film.......Altogether «Which Craft?» is a fine release definitely worth listening to from a Danish musician that ought to have far more concerts booked in her calendar – not just in the Copenhagen area but also in Norway, Sweden and Finland"
It's possible to read the whole review here (it's in Norwegian):
- Salt-peanuts.eu, Jan Granlie

Listen to "Which Craft" on Spotify:
https://open.spotify.com/album/6tsGVcEUh7jCcJwN9LrPSc

In 2011 bandleader Pernille Bévort released the double-Cd ”Perfect Organization” with her big ensemble Radio Bévort featuring the internationally recognized bandoneon player Marcelo Nisinman. This release received a lot of positive reviews:
”Bévort and Nisinman's accomplishment is to merge tango and jazz in passionate embrace to the point where the seam fails to show. On Perfect Organization it sounds as if the two idioms were always meant for each other. What is perfect? Arguably nothing, but this is as close as it gets”                                      - By Ian Patterson. Published on All About Jazz. Sep. 22nd 2011.

Now bandleader Pernille Bévort has written and arranged a string of new tunes for this colorful, interesting ensemble and this release is Pernille’s 10th release as bandleader/composer.

Radio Bévort is a colorful ensemble where different nationalities, inspirations and instruments meet. The compositions are inspired by diverse genres of music and indeed by life itself. In the music you can feel the flavor of tango and jazz and also find very free passages combined with very thoroughly written arrangements.
The band’s line-up is rather unconventional with a rhythm section of drums, bass, guitar and accordion/piano combined with 4 woodwinds that “doubles”. This combined with the different compositions and arrangements composed especially for this ensemble, gives the group a special sound with a timbre colored by the woodwind arrangements and the accordion/piano.

It's possible to hear short excerpts of the music here:
Soundcloud